Electric cars are starting to become more frequent in the automotive industry. Big-name companies including Chevrolet and Ford have their feet in the water with this style of vehicle, and the whole industry is beginning to transition to a sustainable way of life in order to get away from unhealthy emissions and provide cleaner air. Did you know our campus is also taking that step?

One of the Green Fee-funded projects currently in operation includes a fully customized electric car. The Transportation Educational Center’s electric utility car is used by the staff and students for various tasks around the property. This utility vehicle was converted from using gas to a fully electric motor in 2010 through the Green Fund. Students also played a role in helping build it in their classes.

In order to educate students on electric cars, the TEC initiated a second Green Fee project in the Fall of 2013. Ralph Tate, Associate Professor, an associate professor of automotive technology, donated his 2001 PT Cruiser to the university in order for students to work on the conversion to electric power.

Using a grant of $17,500, Tate and 35 other students have been working on the car. More students are expected to join the project in the future, and Tate expects the car’s completion during the Fall 2016 semester. Once the car is completely converted, it will be used by TEC students and faculty to travel to and from the campus when needed.

What makes Tate even more excited about the project is the effect it has made on the community at large. In his personal time, he said he enjoys taking the car to local high schools. Tate said, “I enjoy taking this to the schools and showing the students this kind of technology. It gets them excited about sustainability.”

In addition, the car will save money. According to Tate, the PT Cruiser will be able to run 40-50 miles on a single, full charge. While it does take the use of coal to power the vehicle, the amount saved by a fully electric car far outweighs the amount it took to make it.

Did you Know: In just one year, an electric car reduces its carbon footprint by about 1,000 pounds of carbon dioxide emissions per year. 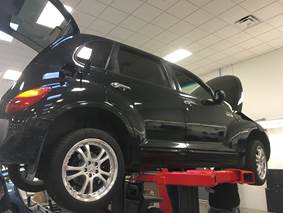 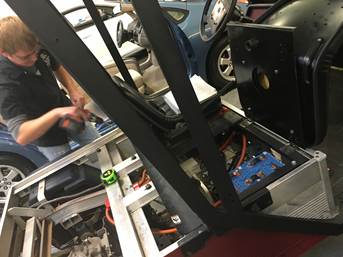